Guyanese cuisine, what not to miss while visiting Guyana

By: Joy Hind (a Guyanese cook living in Suriname)

In Guyane, it is not a tradition to have a starter and dessert. The main dish usually consists of fish or meat with rice or home styled bread. But enough preamble and let’s get into this!

Home 9 Blog 9 Guyanese cuisine, what not to miss while visiting Guyana

What to eat while visiting Guyana? 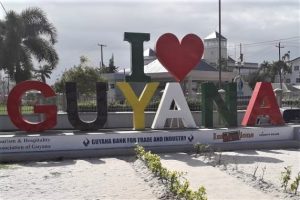 On your holiday in Guyana make sure you taste Guyana cuisine! It’s so tasty!  In Guyana, they can serve a main dish during breakfast in your hotel! Such as Pepperpot! So watch out if you are a bread lover!

What’s for dinner in Guyana? 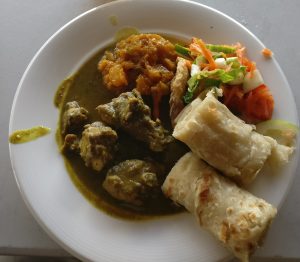 ROTI AND CHICKEN CURRY. Guyanese roti, an Indian flatbread, can be stuffed with either split peas or potatoes. It is mainly served with curried chicken, potatoes, or vegetables. Another flatbread, known as the buss up shut also belongs to the roti family.

A traditional and versatile Guyanese dish that you are sure to encounter is the COOK UP RICE. It is a one-pot dish that can be made with any type of peas and meat. If you’re not a lover of peas or beans you can opt not to use peas and use callaloo or spinach in place of the peas. To add extra flavor you can use salted pigtail or salt beef and the whole is steamed to perfection in coconut milk. Mind your herbs such as oregano, basil (known as the married man poke), the fine leaf thyme and the marawiri pepper, are always found in Guyanese kitchens.

Next up is the PEPPER POT. Pepper pot is an Amerindian-derived dish popular in Guyana. It is traditionally served at Christmas but nowadays it’s sold the whole year-round. Pepper pot is a stewed meat dish, strongly flavored with cinnamon, cassava reep (a special sauce made from the cassava root), and peppers. Beef, pork, and mutton are the most popular meats used. Pepper pot is popularly served with a dense Guyanese-style homemade or home-style bread or rice.

METAGEE, METEMGEE OR METEM is a stewed meat dish made from mixed meat, salted fish, and dumplings with coconut milk, onions, thyme, cassava, plantains, okra, yam, and hot pepper sauce. This Guyanese dish is influenced by the African cuisine and can differ in taste, depending upon the types of meat, baked fish and/or vegetables used. So now you have downed some of our main courses what about some salty snacks? 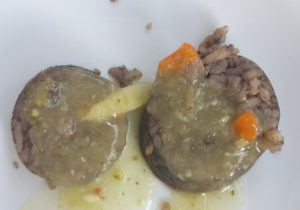 EGG BALLS, an overall favorite is a fried, spiced cassava or potato croquette with a whole boiled egg hidden inside and also served with mango sour. Well, you’ve guessed it by now, mango sour is popular in Guyana.

WHITE PUDDING. No not milk, custard, and sugar pudding. but boiled white rice in coconut milk. Add herbs such as the fine leaf thyme, the married man poke (you’re accustomed to the names by now right?), onions, and garlic. After being stuffed into sausage casings it is steamed in a well-flavored broth.

COW FACE or CHICKEN FOOT SOUSE. Inspired by a cure for hangovers this zesty souse recipe is bound to have your taste buds asking for more. Beef trotters and ears boiled in a flavored broth strained and then pickled lime juice or vinegar, raw diced onions, pepper, salt, and herbs. When left to marinade overnight the taste is enhanced. Chicken feet can also be used instead of meat.

PICKLES anyone? Yes, we have that too. Pickled seasonal fruits such as mangos, gooseberries, and cucumbers to name a few. And if you were wondering:  but I have a sweet tooth? No worries.

BLACK PUDDING. It’s starting to sink in now right? It’s just the opposite of white pudding but with the addition of cow’s blood and cinnamon. Eaten together with mango sour.

Note: A lot of these snacks can be bought in snack shops in Georgetown! Watch this movie about life in Guyana. Just to get you in the mood! 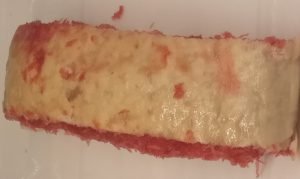 COCONUT BUNS are Guyanese kid’s favorites! A sweet, flavored, cakey dough with the addition of freshly grated coconut. Mounds dropped on a baking sheet come out golden brown with just a tad bit dark brown on the edges. Grab a glass of milk and a slice of cheeseburger bun style and you’re an authentic Guyanese.

SWEET COCONUT ROLLS (known as salara) is eye-catching due to the bright red colored shredded coconut which is rolled in soft bread dough. The swirl effect when you cut it is pleasing to the eye as well as the taste.

The cake that takes the crown in Guyana is the BLACK CAKE. The name alone sends saliva running. A dense cake made from dried fruits, nuts, and a lot of rum.

WHITE OR CHOCOLATE FUDGE Guyanese style. What’s so Guyanese about it you may ask? It’s just plain old fudge. Well in Guyana the fudge is cooked a tad bit longer and placed in a buttered dish to set. It is then cut into squares when cool. Talk about a major hype.

Well, there you have it. These are just a few from Guyana’s arsenal of foods to eat! Besides Guyanese cuisine, you can also order European food at restaurants and hotels.  But you can not leave Guyana without tasting some local dishes, can you? So make sure you have a bite of real Guyanese cuisine while on a trip to Guyana with us! 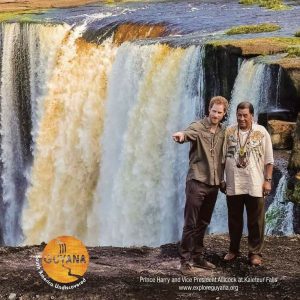 Home 9 Blog 9 Guyanese cuisine, what not to miss while visiting Guyana